skip to main | skip to sidebar

Where have I been all these while? Hehehe .. well I am rather busy with houseworks, daughter and many many more... but the one that took up lots of my time is watching couple of series ... :)
The series that I am watching at the moment are :
HEROES

The series is about people all over the world discovering that they have superpowers and trying to deal with how this change affects their lives. Some of the superheroes who will be introduced to the viewing audience include Peter Petrelli, an almost 30-year-old male nurse who suspects he might be able to fly, Isaac Mendez, a 28-year-old junkie who has the ability to paint images of the future when he is high, Niki Sanders, a 33-year-old Las Vegas showgirl who does things that are mysteriously connected with mirrors, Hiro Nakamura, a 24-year-old Japanese comic-book geek who literally makes time stand still, D.L. Hawkins, a 31-year-old inmate who can walk through walls, Matt Parkman, a beat cop who can hear other people's thoughts, and Claire Bennet, a 17-year-old cheerleader who defies death at every turn. As the viewing audience is discovering the nature of each hero's powers, the heroes, themselves, are discovering what having superpowers means to them as well as the larger picture of where their superpowers come from. Tune in each week to see how these heroes are drawn together by their common interest of evading the series' antagonist who wants to harvest their super-DNA for himself.
I am waiting for episode 22 :)
DESPERATE HOUSEWIVES 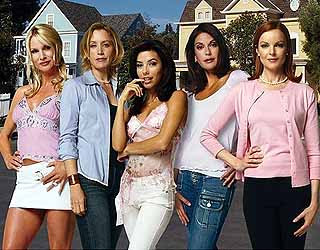 This series is narrated by the late Mary Alice Young, Desperate Housewives takes viewers inside Wisteria Lane, a small section of suburban America that's anything but ordinary. This primetime soap delves deep into the lives of a circle of women with a mix dark humor and drama that helps expose the truth that things are never as they seem.The tale of these women started with the death of one of their own, Mary Alice Young. Even though she is a resident of Wisteria no longer, she guides us through the daily lives of her close friends, family and neighbors from her unique and all-seeing point of view.The women of Wisteria include Susan Mayer, a single mother and divorcee, struggling to raise her teenaged daughter, Julie, all while going to extreme lengths to find the man of her dreams, who may be her neighbor, Mike Delfino. Lynette Scavo is a mother four who is dealing with the change of going from a stay-at-home mom to a career woman as she helps her husband Tom open their own pizzeria. Bree Van De Kamp, the quintessential Martha Stewart-esque housewife, presents a calm and collected exterior, but is dealing with the pain of losing her husband, Rex, the challenge of raising two rebellious children, Danielle and Andrew, and her second marriage to the mysterious Orson Hodge. Gabrielle Solis had it all -- a successful modeling career, an equally successful husband, Carlos and a large house -- but with the end of her marriage, Gabrielle must learn how to make it on her own. Lastly Edie Britt, the self made successful real estate agent whose love life is at the top of everyone's gossip list. Wiseria Lane has experienced it's share of mysterious comings and goings. 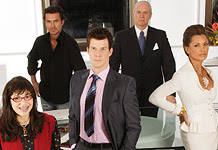 Well, Ugly Betty is about a bright but ordinary-looking woman is a fish out of water working at a glitzy fashion magazine. Adapted from a Colombian telenovela.

So, should you have the chance to watch any of the above, do watch ok? As for me, I will watch those series till the conclusion of it .. :)

o.O waaaaaa mommy has one lil misha has one page .. cool!!!

If you have not watched them, I would certainly recommend The Hustle and Boston Legal.

So sad that both Heroes & Lost will be ending the season soonnnnnn...

And I just finished the last episode of HEROES! So exciting, everything happening at once, but the end bit... hmmmm... potong stim a bit! Still, cannot wait for next season to start! YATTTAAAAAA Ha!!!!!

lb .. hahaha .. i have downloaded the last episode .. will watch SOON :) these few days sibuk lar .. so . have to wait till guests go back first :)

I am Princess Misha's Mum
I am a Malaysian residing outside Malaysia at the moment. I have a 9 going to 10 years old daughter. We love to visit new places and try new food :)

If you appreciate what's posted here, do not hesitate to drop a comment! If you don’t, please leave and don’t pollute this blog! Any unpleasant comments directed to insult the authors will be subjected to deletion immediately! Thank you.

Do visit here if you are free...